Rabbi and Professor Eugene Weiner was a brilliant person with a bright destiny. Born in America into a family of Eastern Europe emigrants (from Ukraine and Vilna), he grew up in New York and Miami Beach, graduated from the Jewish Theological Seminary of America (JTSA) and Columbia University. In 1969 along with his family, his wife Anita and two young sons Daniel and David, Eugene Weiner made aliya, served for 18 years in the Israel Defense Forces where he got the rank of captain. He was a professor of sociology at the University of Haifa, where the students for several years awarded him the title of the best teacher, published scholarly works, including several co-authored by his wife Anita.  Eugene did a lot for the development of Jewish studies in the former Soviet Union, where he worked for several years (1996-1999) as head of special projects of the American Jewish Joint Distribution Committee (JDC) in Moscow. He has provided many-sided support to academic programs in Jewish Studies, was a member of the International Council of Sefer Center. 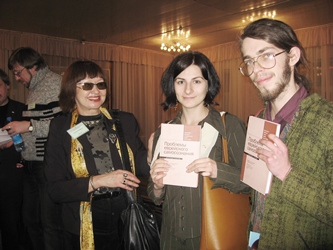 Photos of Eugene Wiener Grant awardings and the laureates are in an open access at our Photo Gallery.

Sefer Center expresses the gratitude to Anita Wiener for this valuable support for research and university teaching in the field of Jewish Studies.
Eugene Weiner Grant Laureates 2019