On August 1–11, 2019, a field school, an expedition on Jewish epigraphy in Moldova was conducted. The expedition was organized by the Center "Sefer" together with the Center for Slavic-Jewish Studies of the Institute of Slavic Studies of the Russian Academy of Sciences with the support of the Genesis Philanthropy Group and the Russian Jewish Congress.
This year, the object of study was the Jewish cemetery of Orhei - one of the oldest and most famous Jewish necropolises in modern Moldova.


15 young researchers from Belarus, Israel, Latvia, Moldova, Russia and Ukraine took part in the school-expedition on epigraphy in Orhei. Under the leadership of Ekaterina Karaseva (St. Petersburg) and Alexandra Fishel (Kiev), the supposedly oldest part of the Jewish cemetery in Orhei was cataloged. It is not possible to cover the entire cemetery within the framework of one expedition due to too many tombstones. In total, 914 monuments and their fragments were recorded. It is important to note that the expedition participants found the matzevot described in the catalog of David Goberman, a well-known art historian, artist and ethnographer. He was involved in photographing carved tombstones in the existing and abandoned Jewish cemeteries of the former Jewish towns of Bessarabia, Northern Bukovina and Eastern Galicia (modern Moldova, Chernivtsi , Ivano-Frankivsk and Transcarpathian regions of Ukraine).


The result of the work at the cemetery was the compilation of a catalog of the site - photos of the monuments, fixing the size of the monument, describtion of  the decor and material, transcription of grave inscriptions, and also drawing up of a map. The earliest burial within the designated area dates from 1708. Based on the materials of the expedition, it is planned to prepare an electronic complete catalog of the cemetery, which will be available in the public domain on the SFIRA database website.


The Sefer Center plans to continue cataloging the old site of Orhei cemetery in the next year.. On August 1-10, 2019 "Sefer" center organizes a field expedition on epigraphy in Moldova, with the support of Genesis Philanthropy Group and the Russian Jewish Congress. In the new field season, the center "Sefer" will continue to study the Jewish material heritage in the historical region of Bessarabia, started in 2017. 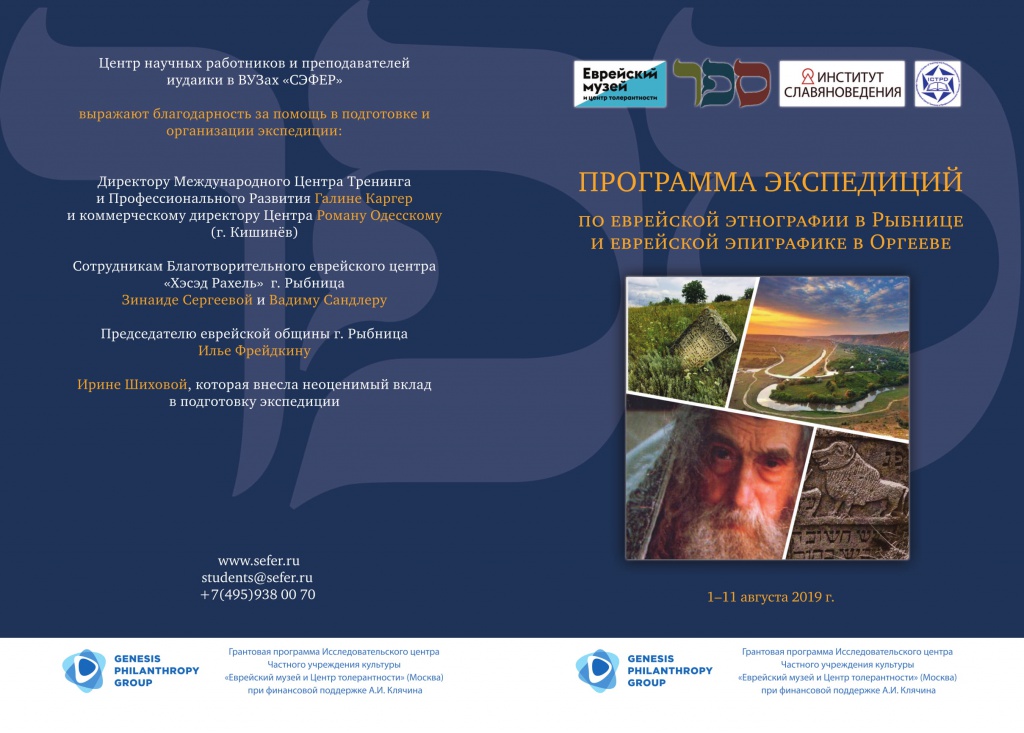 This year the object of study will be the Jewish cemetery of Orgeev (Orhei), which is one of the oldest and largest Jewish necropolis in modern Moldova. The purpose of the expedition will be the documentation of the old site, which has preserved more than a thousand tombstones of XVII – XIX centuries. As a part of field work fixation of epitaph texts, photography and measurement of monuments will be carried out. In addition, a detailed map of the site will be made indicating the location of the tombstones. Students and young scientists who already have experience in epigraphic research, as well as those engaged in the study of the history and cultural heritage of Jews in the region are invited to participate in the school-expedition. Among the new participants, preference will be given to applicants with the skills of field and desk work, as well as knowledge of Hebrew. It is mandatory for all participants of the expedition to have their own notebook.

To participate in the school please complete the application form by May 15th. Selection of successful candidates will be performed by May 25th.